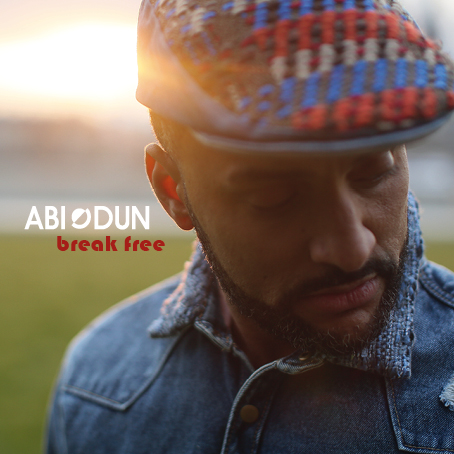 Abiodun’s album Break Free is an authentic, handmade mix of global pop sounds. It fuses different musical genres like afrobeat, soul, funk and rock. Break Free is made up of eleven contrasting songs created by an uncompromising artist. They are soulful and energetic but, at the same time, contemplative, fragile and sensitive. The artist’s message revolves around topics such as personal growth, self-realization, spirituality and collective empowerment – pointing out corruption, social injustice and environmental issues (e.g. as in songs like Great green wall or Alarm don blow). He expresses himself with a unique voice and style in English, Pidgin and Yoruba. Abiodun draws his energy and inspiration from legends such as Marvin Gaye, Bob Marley, Fela Kuti and, African folklore without losing touch with the current sounds and vibes of his era. He sees himself as a retro-modern artist of a new urban roots movement.
The album is a natural progression of Abiodun’s musical artistry over the past two decades. It re-presents Abiodun as an artist, who is constantly expanding the dynamic global boundaries of his musical language and oeuvre without denying his identity. The album is available on all major digital download and streaming platforms: iTunes | Spotify | Apple Music | Google Play | Amazon | Deezer | Tidal | YouTube Music